Previous studies have reported that global longitudinal strain (GLS) is reduced in patients with hypertrophic cardiomyopathy (HCM) while left ventricular ejection fraction (LVEF) is normal. Our aim was to assess GLS in individuals with HCM mutations without hypertrophic changes and to determine its prognostic value for the development of HCM.

GLS is increased in HCM mutation carriers without hypertrophic changes. GLS was of no clear prognostic value for the development of HCM during follow-up, in contrast to age, pathological Q waves and maximal wall thickness.
Extras
Supplementary table. Echocardiographic follow-up in 80 individuals with hypertrophic cardiomyopathy mutations
Opmerkingen

Hypertrophic cardiomyopathy (HCM) is the most common inherited cardiac disease caused by mutations in genes that encode proteins of the cardiac sarcomere [1, 2]. Genetic testing allows the identification of individuals carrying HCM mutations who do not fulfil the echocardiographic criterion of HCM [1, 2]. Due to age-related penetrance, these mutation carriers are advised to undergo periodic follow-up including electrocardiography (ECG) and echocardiography [1, 2]. Currently, we are unable to predict the development of HCM [3]. In patients with overt HCM, studies have revealed a reduced global longitudinal strain (GLS) assessed with speckle-tracking echocardiography (STE), despite a normal left ventricular ejection fraction (LVEF) [4]. Several HCM cohort studies have shown that GLS is predictive of outcome [5‐7]. Data regarding GLS in HCM gene mutation carriers without hypertrophic changes are limited [8‐11]. Our aim was to assess GLS in mutation carriers and healthy controls and to determine its predictive value for the development of HCM during long-term follow-up.

This single-centre retrospective case-control and cohort study included 120 HCM mutation carriers without hypertrophic changes and 110 healthy controls, who were clinically evaluated at our cardiogenetic outpatient clinic between 2004 and 2017. For the cases, inclusion criteria were individuals with a pathogenic HCM gene mutation not fulfilling the echocardiographic criterion of HCM and with a LVEF ≥50% according to the guidelines [1, 2, 12]. Exclusion criteria were a tracking feasibility score <2 in ≥2 apical views and prior cardiovascular surgery. In total, 138 HCM mutation carriers without HCM were identified. Sixteen (12%) were excluded due to insufficient tracking feasibility and 2 (1%) because of prior cardiovascular surgery. Variants classified as class IV or V were considered pathogenic [13]. Controls were recruited via an advertisement [14]. For the controls, inclusion criteria were normal physical examination, normal ECG, and a LVEF ≥50%. Exclusion criteria were prior cardiovascular disease or risk factors, systemic disease, medication known to influence cardiac function, sports participants exercising for 6 h or more per week on a regular basis and aiming to improve their performance, body mass index >40, and women with breast implants [14]. The study conforms to the principles of the Declaration of Helsinki. Of the 138 healthy controls who were clinically evaluated, 110 (80%) were included. Ten (7%) were excluded due to insufficient tracking feasibility and 18 (13%) were randomly excluded for age and sex matching. All patients and controls gave informed consent for inclusion in the registry and local institutional review board approval was obtained.
Clinical assessment included medical history, physical examination, ECG, and transthoracic echocardiography. Studies were performed using commercially available echocardiography systems (Philips). Left ventricular hypertrophy was evaluated with the Romhilt-Estes criteria. Pathological Q waves were defined as duration >40 ms or depth >30% R wave in ≥2 leads. Maximal wall thickness, left atrial dimension, and left ventricular end-diastolic dimension were measured according to the guidelines [2, 12].
Standard four-chamber, two-chamber, and three-chamber views were obtained for STE analysis at frame rates of ≥50 frames/s. All STE measurements were performed by a single observer using Tomtec Imaging Systems, 2D-CPA, Build No. 1.3.0.91, Unterschleißheim, Germany. First, the cardiac cycle with the best image quality was selected. Cardiac cycles were defined by the positioning of R waves. End systole and end diastole were defined by the frame with the smallest and largest left ventricular diameter, respectively, and by determining the aortic valve closure. After manual tracing of three points designated by the software in the left ventricle on an end-systolic frame, the software automatically traced the endocardial border. Tracking feasibility in each apical view was rated with a tracking feasibility score of 3 when, on visual inspection, tracking of all myocardial segments appeared correct; 2 if it failed in one segment; and 1 if tracking was insufficient in ≥2 segments [15]. In views with foreshortening the tracking was deemed insufficient for that view. The software automatically divided the left ventricular wall into 18 segments (6 basal, 6 mid-left ventricle, and 6 apical) and calculated the longitudinal strain in all segments individually, after which the appropriate segments were averaged according to the defined region (base, mid-left ventricle, apex) (Fig. 1). Peak systolic longitudinal strain for each individual segment was defined as the peak value on the curve during the ejection phase of one cardiac cycle. The software calculated the GLS automatically. For intra-observer variability, one reader independently performed STE analysis on 20 cases in an identical fashion on two occasions with a 2-month period in between the measurements. For inter-observer variability, two readers independently performed STE analysis on 20 cases. Left ventricular end-diastolic and end-systolic volumes as well as LVEF were assessed with the biplane method of the disks using the Tomtec software.
×
Mortality data were obtained from the civil service register in May 2017, and were complete in 99% of the cases. Cause of death was obtained from the medical chart or the general practitioner. Echocardiographic follow-up was available in 80 mutation carriers. HCM during follow-up was defined as a maximal wall thickness ≥13 mm according to the guidelines [2].
Calculations were performed using SPSS 24 (IBM, Armonk, NY, USA). Normally distributed continuous data are expressed as mean ± standard deviation and non-normally distributed data as median followed by interquartile range. For comparing categorical variables Pearson’s chi-square test was used. For comparing continuous variables the t-test was used, and Mann-Whitney U in the case of non-normally distributed data. For comparison of consecutive echocardiographic data, the paired t-test and in the case of non-normally distributed data the Wilcoxon signed rank test were used. All analyses were two-sided; p-values <0.05 were considered significant. Univariate and multivariate cox regression analyses were performed and expressed as hazard ratio (HR) and 95% confidence interval (CI). Univariate significant variables were entered into the multivariable regression model.

GLS is increased in HCM mutation carriers without hypertrophic changes as compared to normal individuals. GLS provided no clear prognostic value for the development of HCM during follow-up, in contrast to age, pathological Q waves and maximal wall thickness.

This work was supported by the Netherlands Cardiovascular Research Initiative CVON2014-40 DOSIS, an initiative with support from the Dutch Heart Foundation.

H.G. van Velzen, A.F.L. Schinkel, R.W.J. van Grootel, M.A. van Slegtenhorst, J. van der Velden, M. Strachinaru and M. Michels declare that they have no competing interests.
Open Access This article is distributed under the terms of the Creative Commons Attribution 4.0 International License (http://​creativecommons.​org/​licenses/​by/​4.​0/​), which permits unrestricted use, distribution, and reproduction in any medium, provided you give appropriate credit to the original author(s) and the source, provide a link to the Creative Commons license, and indicate if changes were made.
vorige artikel Seeing the disease before it has manifested itself
volgende artikel Frailty score for elderly patients is associated with short-term clinical outcomes in patients with ST-segment elevated myocardial infarction treated with primary percutaneous coronary intervention
insite
INHOUD
share
DELEN 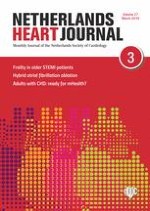 Readmission and mortality in patients ≥70 years with acute myocardial infarction or heart failure in the Netherlands: a retrospective cohort study of incidences and changes in risk factors over time

Seeing the disease before it has manifested itself

At last, mobile health leading to a diagnosis in a young patient with congenital heart disease