During the first 3 months of 2007, 419 patients were seen at the FLOCC. Of these patients, 360 were referred by general practitioners, 55 by other specialists and four were self-referrals. The largest referral groups were: chest complaints (44%), palpitations (19%) and dyspnoea (12%). In 65% of the 419 patients, cardiovascular disease was ruled out and they were discharged. Of these, 41% of the diagnoses were made on the same day, with a further 44% after additional investigations, mostly Holter registration. During 10 years of follow-up, 49 patients died: 17 of cardiac, 29 of non-cardiac, mainly cancer, and three of unknown causes. Of the initially discharged patients, 35% were referred again after an average of 4 years (1,443 days), with 47% reporting similar complaints.

Of the patients referred to our FLOCC, most had chest pain. In one-third of all patients, cardiac disease was ruled out on the same day. Of all the patients discharged, 85% were diagnosed after basic investigations that could be ordered by a general practitioner. Holter registration was the most frequently requested additional investigation. These results support the development of less expensive, easily accessible extramural cardiology clinics. 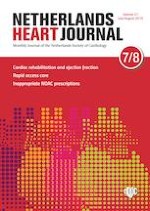