Finding the Spiritual in the Secular: A Meta-analysis of Changes in Spirituality Following Secular Mindfulness-Based Programs | mijn-bsl Skip to main content
ZOEKEN MENU 1 2 3 4

Spirituality has historically been a neglected aspect of people’s lives within a healthcare context. Previous meta-analyses of the effect of Mindfulness-Based Programs (MBPs) on spirituality have been limited by the small number of includable studies that were available at the time, by not comparing MBPs to active controls, and by not investigating whether effects continue to be observed at follow-up. Therefore, the current systematic review and meta-analysis aimed to more comprehensively examine whether, and to what extent, secular MBPs increase spirituality, and to identify moderators of any observed effects.

Random effects meta-analyses were conducted on 13 controlled trials of MBPs measuring spirituality that were identified by a systematic search of PsycInfo and Medline.

Secular MBPs appear to increase spirituality; these effects endure beyond the end of the MBP and they cannot wholly be attributed to non-specific therapeutic factors. Limitations are discussed.
volgende artikel Group and Common Factors in Mindfulness-Based Programmes: a Selective Review and Implications for Teachers 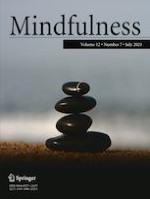 Reducing Stigma Through Interconnectedness and Compassion: a Buddhism-Based Approach to Reduce Stigma Toward People with Mental Illness

Effect of Mindfulness Training on Inhibitory Control in Young Offenders