The feasibility, reliability and validity of a Welsh version of the EQ-5D health-related quality of life questionnaire were evaluated by means of a postal questionnaire administered on two occasions to a sample of adults across Welsh-speaking areas of Wales. The absolute response rate was 126 (out of 1,000), though after considering language and expected response to Welsh language questionnaires, the adjusted response rate was 50%. Respondents’ mean age was 56.8 ± 18 years and 38.7% reported having chronic illness. The number of missing items from the descriptive EQ-5D (aggregated for both administrations) was 4, representing 0.33% of all responses. Five EQ-VAS responses were returned incomplete. 97 (85.8%) respondents reported no change in health in the fortnight between the first and second administration. The Spearman rank coefficients for these respondents were 0.828 for EQ-5D scores, and 0.815 for EQ-VAS, respectively (both P < 0.000). Construct validity was confirmed by the power of the EQ-5D to discriminate between those expected to be healthy or otherwise, as assessed by self-reported health, presence of chronic illness, receipt of treatment, and age (all P < 0.0001). It is concluded that the Welsh version of the EQ-5D is both valid and reliable for measuring health status in subjects across Wales.
vorige artikel Issues in the design of Internet-based systems for collecting patient-reported outcomes
volgende artikel Which personal quality of life domains affect the happiness of older South Africans?

Titel
Feasibility, validity and reliability of the Welsh version of the EQ-5D health status questionnaire
Auteur
Dyfrig A. Hughes 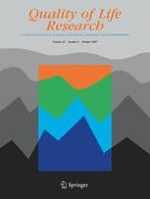 The Burden of Stroke Scale (BOSS) provided valid, reliable, and responsive score estimates of functioning and well-being during the first year of recovery from stroke

The relationship between quality of life and posttraumatic stress disorder or major depression for firefighters in Kaohsiung, Taiwan