Fatigue is a frequent symptom in patients suffering from chronic diseases, especially cancer patients. A new fatigue questionnaire was recently developed to better assess this condition, the EORTC QLQ-FA12. The aims of this study were to test the psychometric properties of this fatigue questionnaire and to provide normative values.

A total of 2411 individuals (53.5% women), representatively selected from the German general population, responded to the EORTC QLQ-FA12 questionnaire.

Women reported more fatigue than men on all three scales of the EORTC QLQ-FA12 with the following effect sizes: d = 0.29 (physical fatigue), d = 0.22 (emotional fatigue), and d = 0.11 (cognitive fatigue). There were no linear age trends. Confirmatory factorial analysis confirmed the latent structure of the questionnaire. The correlations among the latent scales were between 0.71 and 0.84. The internal consistency coefficients were alpha = 0.92 (physical fatigue), 0.86 (emotional fatigue), 0.79 (cognitive fatigue), and 0.94 (sum score).

The study proved the psychometric quality of the EORTC QLQ-FA12 in the general population. Gender differences should be accounted for when comparing groups of patients. The normative scores can be used to qualify the assessment of the degree of patients’ fatigue.
vorige artikel Consequences of different types of informal caregiving for mental, self-rated, and physical health: longitudinal findings from the German Ageing Survey
volgende artikel Cross-cultural validation of the German version of the Four-Dimensional Symptom Questionnaire (4DSQ) in multimorbid elderly people 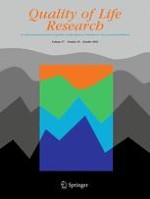 Alcohol consumption, drinker identity, and quality of life among students: why there cannot be one prevention strategy for all

Health-related quality of life in coronary heart disease: a systematic review and meta-analysis mapped against the International Classification of Functioning, Disability and Health