Perinatal Obsessive–Compulsive Disorder (pOCD) refers to the onset/exacerbation of Obsessive–Compulsive Disorder (OCD) during the perinatal period. This disorder has been studied in mothers, with limited research conducted on fathers. The aim of the current study was to conduct the first systematic review of research investigating the experience of pOCD in fathers. A systematic review was conducted via electronic searches of Scopus, ProQuest, APA PsychNet, PubMed, and EBSCOhost. There were 523 articles identified and screened for eligibility, resulting in six eligible studies included in the final review. All studies reported the presence of subclinical obsessive–compulsive symptoms in fathers during the perinatal period, with the prevalence comparable to mothers. Compared to mothers, however, fathers were found to report less intrusion-related distress. Two studies reported a correlation between dysfunctional beliefs, negative appraisal of intrusions, and pOCD symptoms. Common categories of obsessive thoughts and compulsions experienced by fathers were also identified. Fathers appear susceptible to pOCD, which is consistent with the Cognitive-Behavioral Theory of OCD. Future research is recommended, therefore, to investigate clinical prevalence and severity of pOCD in fathers, particularly relative to mothers, and further investigate the role of dysfunctional beliefs in the development of pOCD.
vorige artikel Psychosocial Adjustment Across Aggressor/Victim Subgroups: A Systematic Review and Critical Evaluation of Theory
volgende artikel The Efficacy of Parent Training Interventions for Disruptive Behavior Disorders in Treating Untargeted Comorbid Internalizing Symptoms in Children and Adolescents: A Systematic Review 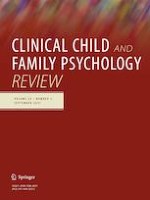 Exploring Perinatal Indicators of Infant Social-Emotional Development: A Review of the Replicated Evidence

Increasing Effectiveness of Cognitive Behavioral Therapy for Conduct Problems in Children and Adolescents: What Can We Learn from Neuroimaging Studies?

The Premise and Promise of Activation Parenting for Fathers: A Review and Integration of Extant Literature

Psychosocial Adjustment Across Aggressor/Victim Subgroups: A Systematic Review and Critical Evaluation of Theory

A 25-Year Review of Nighttime Fears in Children: Past, Present, and Future