The two items that measured children’s general physical health in the data were: “Compared to other children, would you say [child’s] health is the same, better, or worse?”, and “In general, would you say [child’s] health is very poor, poor, average, good, or very good?”. The availability of these items differed depending on the country and the round of data collection (Oldroyd, 2020). To allow us to make direct comparisons between countries, we used variables that were available at the same rounds across all four countries; we used the “Compared to other children…” variable at rounds one and two, the “In general…” variable at rounds three and four, and both of these variables at round five. We chose to combine the variables in round five because they were moderately to strongly correlated in all four countries at round five (r = 0.3 to 0.5, p < 0.05). There was a significant, positive correlation between the adjacent general physical health items at all rounds, in all four countries (Oldroyd, 2020). Given the large gaps between each round of data collection in the Young Lives study (approximately three-to-four years), it makes sense to focus on children’s general physical health because this construct is measured using at least one of the same two general physical health items from age 1 to 15, as opposed to other outcome measures which change depending on the developmental stage of the child (i.e., cognitive measures). Higher scores indicate better general physical health.

The “shocks” scale is a checklist of events that could have affected the household. In total, there were 44 items. We used the eight items from the checklist that measured environmental events, such as “too much rain or flooding” and “pests or diseases affecting livestock”, because we wanted to control for some external environmental influences on children’s physical health (Kousky, 2016). We used the same items in every round in all four countries. Higher scores indicate more exposure to environmental shocks.

In round 1, the mothers were asked “was the child born before expected?”. If they answered “yes” (1), that indicated that the child was born prematurely (no = 0). This item was the same in all four countries.

The data used in this publication come from Young Lives, a 20-year study of childhood poverty and transitions to adulthood in Ethiopia, India, Peru and Vietnam (www.​younglives.​org.​uk). Young Lives is funded by UK aid from the Foreign, Commonwealth & Development Office and a number of further funders. The views expressed here are those of the author(s). They are not necessarily those of Young Lives, the University of Oxford, FCDO or other funders.

The authors declare no competing interests.
Open Access This article is licensed under a Creative Commons Attribution 4.0 International License, which permits use, sharing, adaptation, distribution and reproduction in any medium or format, as long as you give appropriate credit to the original author(s) and the source, provide a link to the Creative Commons license, and indicate if changes were made. The images or other third party material in this article are included in the article’s Creative Commons license, unless indicated otherwise in a credit line to the material. If material is not included in the article’s Creative Commons license and your intended use is not permitted by statutory regulation or exceeds the permitted use, you will need to obtain permission directly from the copyright holder. To view a copy of this license, visit http://​creativecommons.​org/​licenses/​by/​4.​0/​.
Publisher’s note Springer Nature remains neutral with regard to jurisdictional claims in published maps and institutional affiliations.
volgende artikel Do Occupational Performance and Social Support Predict Health and Well-Being Among Mothers of Preterm Infants?
insite
INHOUD
share
DELEN 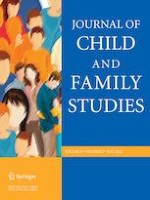 Handheld Devices: The Barrier for Parents with Mental Health Difficulties in Child Outcomes