Given that one of the most powerful predictors of adult crime is the presence of behavior problems in childhood and adolescence, there is a need to further understand factors that determine behavior patterns during this developmental stage. This study focuses on stressful life experiences such as exposure to delinquent peers, racial discrimination, as well as family characteristics such as parenting style and family transitions. Data come from four waves of the Family and Community Health Survey, an African-American sample. The present study investigates 354 males from this dataset. We utilize a group-based trajectory model to estimate the number and type of trajectories of delinquency. We then estimate multinomial regression models to predict trajectory group membership. The results indicated that there were four distinct groups of offenders (negligible delinquents; early starter/declining; late starter; and early starter/chronic offenders). We predicted group membership using both early predictors and measures of change in these predictors across the study period. The results indicated that individuals who experience greater racial discrimination (both early in childhood and throughout adolescence) are more likely to be in trajectory groups that begin offending early and persist through adolescence. Additionally, those respondents who reported having friends with greater delinquent behavior were more likely to be in groups that began their offending early in life and persisted when compared to groups who started later or desisted as they entered adulthood. The results contribute to developmental research and provide information that may be helpful in preventing adolescents from persisting in antisocial behavior as they enter adulthood.
vorige artikel Family Functioning and High Risk Adolescents’ Aggressive Behavior: Examining Effects by Ethnicity
volgende artikel Child Welfare and the Transition to Adulthood: Investigating Placement Status and Subsequent Arrests 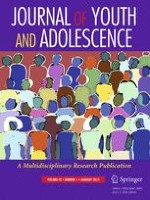