We report data from a randomised controlled trial of mindfulness-based cognitive therapy to pilot procedures for people with a history of suicidal ideation or behaviour, focusing in particular on the variables that distinguish those who complete an adequate ‘dose’ of treatment, from those who drop out. Sixty-eight participants were randomised to either immediate treatment with mindfulness-based cognitive therapy (MBCT) (n = 33) or to the waitlist (n = 36) arm of the trial. In addition to collecting demographic and clinical information, we assessed participants’ cognitive reactivity using the means end problem-solving task, completed before and after a mood induction procedure. Ten participants dropped out of treatment, and eight dropped out of the waitlist condition. Those who dropped out of MBCT were significantly younger than those who completed treatment, less likely to be on antidepressants, had higher levels of depressive rumination and brooding and showed significantly greater levels of problem-solving deterioration following mood challenge. None of these factors distinguished participants in the waiting list condition who remained in the study from those who dropped out. Our results suggest that individuals with high levels of cognitive reactivity, brooding and depressive rumination may find it particularly difficult to engage with MBCT, although paradoxically they are likely to have the most to gain from the development of mindfulness skills if they remain in class. Addressing how such patients can be best prepared for treatment and supported to remain in treatment when difficulties arise is an important challenge. 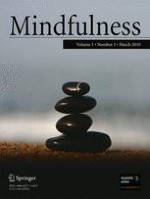 Shauna L. Shapiro and Linda E. Carlson: The Art and Science of Mindfulness: Integrating Mindfulness into Psychology and the Helping Professions

Mindfulness-Based Stress Reduction in Oncology: Evaluating Mindfulness and Rumination as Mediators of Change in Depressive Symptoms

Searching for Mindfulness in the Brain: A Process-Oriented Approach to Examining the Neural Correlates of Mindfulness

Mindfulness in Forensic Mental Health: Does It Have a Role?

Mindfulness: A Finger Pointing to the Moon