The present study investigated the factor structure, gender invariance, and convergent validity of the scores associated with the Reactive–Proactive Aggression Questionnaire (RPQ) in a Singapore sample of 1027 school-going adolescents. Results demonstrated that the 2-factor reactive–proactive aggression model had a superior fit compared with the 1-factor general aggression model, providing evidence that while reactive and proactive aggression were correlated, they were nevertheless distinct and separable. Current findings also provided empirical support for the invariance of the 2-factor model of the RPQ across gender. Furthermore, convergent validity was examined; while both reactive and proactive aggression were shown to be positively and significantly related to delinquency and narcissism, it was proactive aggression rather than reactive aggression that showed relatively stronger associations with delinquency and narcissism. Collectively, these findings provided evidence that there are meaningful differences between reactive and proactive aggression, and contributed to the cross-cultural generalizability of the RPQ.
vorige artikel The Moderating Effect of Physical Activity on the Association Between ADHD Symptoms and Peer Victimization in Middle Childhood
volgende artikel Wanting it Too Much: An Inverse Relation Between Social Motivation and Facial Emotion Recognition in Autism Spectrum Disorder 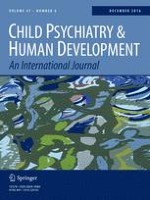 The Social Anxiety Scale for Adolescents: Measurement Invariance and Psychometric Properties Among a School Sample of Portuguese Youths

Effects of War, Terrorism and Armed Conflict on Young Children: A Systematic Review

The Length of Child Anxiety Treatment in a Regional Health System