To address shortcomings of purely reaction-time based attention bias modification (ABM) paradigms, a novel eye-tracking based ABM training (ET-ABM) was developed. This training targets the late disengagement from negative stimuli and the lack of attention for positive information, which are characteristics of depression. In the present study, 75 dysphoric students (BDI ≥ 9) were randomly assigned to either this positive training (PT), or a sham-training (ST) that did not train any valence-specific gaze pattern (positive and negative pictures had to be disengaged from and attended to equally often). Results showed that the PT induced a positive attentional bias (longer fixations of positive than negative pictures). Although the ST group showed an increase in positive attentional bias as well, this increase was not as strong as in the PT group. Compared to the ST, the PT specifically induced faster disengagement from negative pictures. No differential training effects were found on stress responses or state rumination. These results show that the ET-ABM successfully modifies attentional processes, specifically late disengagement from negative stimuli, in dysphoric students, and hence might be a promising alternative to existing ABM paradigms. 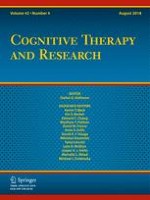 Posttraumatic Stress and Suicidality Among Firefighters: The Moderating Role of Distress Tolerance

Interactive Effects of Traumatic Brain Injury and Anxiety Sensitivity on PTSD Symptoms: A Replication and Extension in Two Clinical Samples

Positive Emotions and Social Anxiety: The Unique Role of Pride

Major Depressive Disorder and Emotion-Related Impulsivity: Are Both Related to Cognitive Inhibition?