During euthymia people with bipolar disorder and their unaffected family members accomplish more than the general population. People with bipolar disorder, or those who are at risk for it, also set higher goals in laboratory tasks than other people. The work reported here examines whether persons vulnerable to mania set elevated goals in their lives. In two studies, a measure of lifetime vulnerability to mania was related to traits bearing on incentive sensitivity, and also to endorsement of high ambitions for fame, wealth, and political influence (assessed by a new measure). Relations were weaker to ambitions for other kinds of extreme goals. The effects were independent of current symptoms of mania and depression and lifetime depression. There was also evidence that incentive sensitivity and elevated aspirations made independent contributions to variance in the measure of manic risk. Discussion focuses on the implications of high goal setting for understanding goal dysregulation and mania. 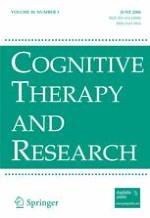 Development and Validation of the Dysfunctional Attitudes Scale for Children: Tests of Beck’s Cognitive Diathesis-stress Theory of Depression, of Its Causal Mediation Component, and of Developmental Effects

Effects of Approach and Avoid Mindsets on Performance, Self-regulatory Cognition, and Affect in a Multi-task Environment

Social Anxiety and the Fear of Causing Discomfort to Others