Thirty individuals with Bipolar I Disorder (16 individuals had relapsed within the last 2 years; 14 individuals had remained well over this period) were hypothesized to score higher on extreme positive and negative appraisals of internal state (HAPPI; Hypomanic Attitudes and Positive Predictions Inventory) than three control groups: remitted unipolar depression group (n = 22), and non-clinical controls with (n = 16) or without (n = 22) a history of hypomanic episodes. In partial support of the primary hypothesis, the relapsed bipolar group and the combined bipolar group scored significantly higher on the HAPPI than the unipolar group and non-clinical group when controlling for age, level of education and bipolar symptoms. It is concluded that self-reported cognitions characterize individuals with bipolar disorder, consistent with a cognitive behavioral approach to its treatment.
vorige artikel The Interaction Effect of Impulsivity and Responsibility in Relation to Obsessive–Compulsive Symptoms 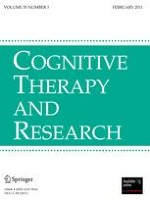