Discrimination based on race/ethnicity, sexual minority status, and gender is associated with higher rates of drinking, drug use and risky sexual behavior during adolescence. The current study explored variation in the link between these three types of discrimination and health risk behaviors by focusing on how this association differed according to externalizing problem behavior status. Participants in the Study of Early Child Care and Youth Development were asked about discrimination and their drinking, drug use and risky sexual behavior (age 15; 50% female, 82% White, n = 939). The association between discrimination and health risk behaviors varied according to both externalizing problem status and the type of discrimination, suggesting that individual-level characteristics (i.e., externalizing behaviors) shape variation in the consequences of discrimination for adolescent health outcomes. Ultimately, these findings point to the need for future research to better understand which adolescents are the most vulnerable to the consequences of discrimination, and when these vulnerabilities are most likely to occur. 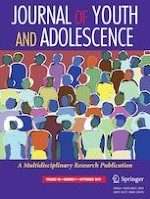 Evaluating the Short-term Impact of Media Aware Parent, a Web-based Program for Parents with the Goal of Adolescent Sexual Health Promotion

A Systematic Review and Meta-Analysis of School-Based Stress, Anxiety, and Depression Prevention Programs for Adolescents