The validity of the SF-6D, a preference-based measure of health-related quality of life, is not well explored in the context of spinal cord injury (SCI). The aim of this analysis was to assess appropriate measurement properties of the SF-6D in a sample of individuals living with SCI.

Longitudinal data from the Rick Hansen Spinal Cord Injury Registry were used. Responses to the 36-item short-form health survey were transformed into SF-6D utility scores. We investigated practicality, floor and ceiling effects, and responsiveness to change. Responsiveness to change was explored using three different anchors that reflected changes in self-reported health, functional independence, and life satisfaction. Discriminative validity was assessed by ten a priori defined hypotheses, with a distinction made between ‘strong’ and ‘weak’ hypotheses.

Three hundred and fifty-eight individuals with SCI were included in this analysis. Practicality was deemed acceptable based on a completion rate of 94 %. The SF-6D showed low responsiveness to detect important health changes over time, and differences in responsiveness were found between individuals with paraplegia and tetraplegia. All five strong hypotheses and three weak hypotheses were confirmed.

The SF-6D demonstrated good practicality and discriminative validity in this sample. The failure to detect self-reported and clinically important health changes requires further consideration. Comparative performance of the SF-6D (i.e., how the SF-6D performs against other preference-based measures) is unknown in the SCI context and requires further research. 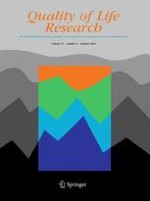 A comparison of EQ-5D-3L population norms in Queensland, Australia, estimated using utility value sets from Australia, the UK and USA