People attending mindfulness courses learn at different tempos, and it is not easy to determine who will improve quickly and who will need more time. Factors such as motivation, trust, skepticism, and individual learning modes (intellectual or emotional oriented) could influence the pace of learning. As a facilitator, one is often surprised by who benefits most and least. Furthermore, the ability to be mindful in daily life (i.e., trait mindfulness) varies considerably between people as a function of age, education level (Bränström et al. 2011), and meditation practice (Josefsson et al. 2011) being the major moderators. A hypothesis might be that those who start lowest have most to gain, as it would naturally take more for a thoroughly mindful person to become even more mindful. However, whether levels of trait mindfulness influence the outcomes of mindfulness-based interventions (MBIs) is not clear. de Vibe et al. ( 2015) found no connection between baseline mindfulness and the effect of MBI on outcome measures with medical and psychology students, while another study reported that students with higher levels of baseline mindfulness increased most in mindfulness and other outcome measures after MBI (Shapiro et al. 2011). …
vorige artikel Just Knowing
volgende artikel Maria Napoli: Tools for Mindful Living: Practicing the 4-step MAC Guide (3rd Ed.). Kendall Hunt, Dubuque, IA, 2016, 193 pp 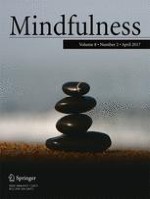 Dispositional Mindfulness and Memory Problems: the Role of Perceived Stress and Sleep Quality

Time Judgments as a Function of Mindfulness Meditation, Anxiety, and Mindfulness Awareness