Mindfulness has a growing evidence base demonstrating its efficacy for mental health patients; however, less is known about its usefulness for psychiatric staff. This study aimed to evaluate the effectiveness of a newly developed mindfulness retreat designed for psychiatrists. Twenty-two consultant psychiatrists, two middle grade doctors and two trainees attended a mindfulness retreat designed by a consultant psychiatrist with long-term experience in mindfulness meditation, in collaboration with a Zen Master. The retreat lasted 2 days, was part silent and involved a range of mindfulness exercises, including meditation and mindful walking. Teaching was provided around establishing one’s own regular practice, as well as how to teach patients to do the same. Questionnaires were distributed to participants before the retreat, immediately after and at 1-week follow-up to evaluate the retreat efficacy. Results illustrated that the retreat significantly increased perceived mindfulness and therapeutic alliance and significantly reduced burnout. This was further supported by a thematic analysis of retreat feedback which identified themes of individual development and retreat experience. The mindfulness retreat appeared to be an effective and acceptable intervention for psychiatrists. Further large-scale evaluation is required.
vorige artikel Self-Compassion and Trauma Processing Outcomes Among Victims of Violence
volgende artikel Mindful Attention Reduces Linguistic Intergroup Bias 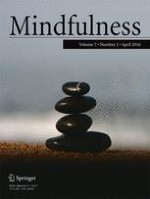 This Is The Hour: A Call for Reflection and Introspection in the Field of Mindfulness

An Examination of Mindfulness-Based Experiences Through Adventure in Substance Use Disorder Treatment for Young Adult Males: a Pilot Study