In patients with ST-elevation myocardial infarction (STEMI), percutaneous coronary intervention (PCI)-mediated reperfusion is preferred over pharmacoinvasive reperfusion with fibrinolysis if transfer to a PCI centre can be ensured in ≤120 min. We evaluated the ambulance driving time to primary PCI centres in the Netherlands and assessed to what extent ambulance driving times were impacted by the expansion of off-site PCI centres.

Based on a computational model, timely ambulance transfer to a PCI centre within 120 min is available to almost all STEMI patients in the Netherlands. Expansion of off-site PCI has significantly reduced the driving time to PCI centres.
What’s new?

Percutaneous coronary intervention (PCI) is a commonly used treatment strategy for coronary revascularisation in both stable coronary artery disease and acute coronary syndrome (ACS) [1]. In the past 20 years, PCI has become a cornerstone in ACS treatment, particularly in patients with ST-segment elevation myocardial infarction (STEMI) [2]. Timely treatment plays an important role in the prognosis of STEMI patients [3]. In STEMI patients with symptoms for <12 h, PCI-mediated reperfusion (wire crossing) is preferred over pharmacoinvasive reperfusion with fibrinolysis if transfer to a PCI centre can be ensured in ≤120 min [4]. In addition, the recommended time from STEMI diagnosis to wire crossing during PCI is ≤90 min [4]. Several measures have been taken to reduce time delays, including field triage, transmission of prehospital electrocardiography (ECG), collaboration of healthcare providers in a STEMI-network, and feedback reporting on time intervals [3, 5‐7].
In its early days, PCI was only performed in hospitals with on-site back-up for emergency cardiac surgery [8]. However, during the last 10–15 years, the procedure has been expanded to include hospitals without on-site cardiac surgery (off-site PCI). Expansion of off-site PCI centres ensures timely revascularisation in STEMI patients living in remote areas, which was observed in the United States and the United Kingdom (UK) [9‐12]. In the Netherlands, the first off-site primary PCI centre was established in 2003 [13]. In 2008, the Dutch government eased the regulations on permits for hospitals to perform specific cardiac interventions in order to anticipate the future need for PCI, after which the number of off-site PCI centres further increased [14]. To keep their permits, off-site PCI centres are required to perform a minimum of 600 PCI procedures annually.
Currently, there are 30 PCI centres in the Netherlands, of which 14 are off-site PCI centres. However, it remains unknown to what extent the expansion of off-site PCI centres has impacted ambulance driving times for STEMI patients on a national scale. We evaluated the ambulance driving time to a centre for primary PCI care in the Netherlands. In addition, we investigated to what degree off-site PCI centres have contributed to a reduction in ambulance driving times.

We obtained a dataset containing the number of inhabitants per four-digit postal code in the Netherlands in 2016 from Statistics Netherlands (CBS). We then used four-digit postal code polygon data describing the geographical coordinates of every Dutch postal code in the same year. We obtained a list of all on-site and off-site PCI centres from the Netherlands Society of Cardiology (NVVC) and the Dutch Association for Thoracic Surgery (NVT). Of note, all PCI centres in the Netherlands perform primary PCI on a 24/7 basis. We collected geographical coordinates of the listed hospitals by entering their addresses into an online coordinate converter (https://​www.​gps-coordinates.​net) (NH). We visually checked the hospitals’ coordinates using a satellite map (https://​www.​google.​com/​maps).

On 1 January 2019, there were 30 PCI centres in the Netherlands: 16 on-site and 14 off-site centres (listed in the Appendix). We calculated 4046 centroids for the Dutch four-digit postal code areas.

PCI accessibility to the Dutch population

This is the first study to report the impact of off-site PCI centres on accessibility to PCI care on a national scale. Our findings demonstrated that almost every individual in the Netherlands lives within 120 min from a primary PCI centre. In addition, we observed a significant reduction in the median driving distance to any PCI centre, which can be attributed to the expansion of off-site PCI centres.

Our results showed that the current distribution of PCI centres in the Netherlands ensures a high level of accessibility. We demonstrated that almost every individual in the Netherlands lives ≤120 min from a PCI centre (except for inhabitants of certain Wadden Islands). This indicates PCI-mediated reperfusion rather than a pharmacoinvasive strategy can be provided to all Dutch STEMI patients, in accordance with European Society of Cardiology guidelines [4]. Moreover, 99.9% of Dutch inhabitants could be transported to a PCI centre in <60 min and 97.4% in <30 min, which can contribute to adherence to the European recommendations of a target STEMI diagnosis-to-wire crossing time of ≤90 min.
A large Swedish study of >10,000 STEMI patients demonstrated that a first medical contact-to-PCI delay of >1 h is associated with an increase in mortality (first medical contact-to-PCI 61–90 versus <30 min: hazard ratio 1.57; 95% confidence interval 1.03–2.41) [16]. Therefore, the short transportation delays in the current study indicated that the current distribution of PCI centres contributes to the quality of care and outcome of ACS patients in the Netherlands.
We observed that 99% of the population lived ≤60 km from a PCI centre. This cut-off was based on a study of >4000 STEMI patients from a large on-site PCI centre in the Netherlands [15]. This study demonstrated an independent association between ischaemic time and driving distance >60 km among STEMI patients who first present at a non-PCI ‘spoke’ centre. However, this finding was not observed in patients for whom the driving distance was >60 km and who immediately called the ambulance services. Possibly, a transportation delay does not increase ischaemic time among ambulance patients in a small and densely populated country such as the Netherlands, because this delay is balanced by the additional preparation time of the catheterisation laboratory at the PCI centre, which contributes to a shorter door-to-balloon time. In Sweden, approximately 55% of the population live <60 km from an on-site PCI centre and approximately 75% of the population are <60 km from any 24/7 PCI centre [17]. However, due to several country-specific differences, including geographical differences, caution should be used when directly comparing the two countries and their healthcare systems. Moreover, despite longer driving distances to PCI centres, STEMI care in Sweden is regarded among the best in the world [18, 19].
The number of off-site PCI centres has increased, and these centres are regarded as safe when compared with on-site PCI centres [11, 12, 20, 21]. In the UK, emergency cardiac surgery after off-site PCI occurs in <0.1% of patients [12]. Time delay in STEMI patients significantly decreased at two individual Dutch hospitals after they started offering off-site PCI [13, 22]. These findings support off-site (primary) PCI. Conversely, Denmark has implemented a more centralised approach. Only four primary PCI centres serve approximately 5.5 million individuals (±1.4 million inhabitants per centre), after two high-volume PCI centres merged into one very large centre performing 1000 primary PCIs annually [23]. After this merger, quality of care was maintained, and the symptom-to-balloon time was decreased by 30 min (p < 0.001). Moreover, a Danish nationwide study could not demonstrate an association between distance to a PCI centre and improved outcome in out-of-hospital cardiac arrest patients, supporting the centralised strategy [24].

One of the strengths of this study is the use of reliable data from government institutions to display a simple structure indicator reflecting one aspect of the quality of a healthcare system [28].
However, there are some limitations. First, our study focused on the impact of off-site PCI expansion on time delays in STEMI patients. However, other local initiatives that were concomitantly introduced, such as prehospital ECG transmission or a home-to-hospital feedback dashboard, have also led to shorter time delays [29, 30]. Second, we used historical ambulance transportation records to build a model to estimate ambulance driving time. Therefore, this study does not fully reflect real-life clinical practice since we did not account for local practice agreements, for example rotating on-call PCI centres in the Rotterdam region. Third, we estimated ambulance driving times for non-mainland areas. However, since 2016, STEMI patients in these areas can be transported by a helicopter, which significantly reduces delays [31]. Fourth, we did not assess the impact of off-site PCI centres on individual patient outcomes. Fifth, we have only presented results from the Netherlands, a small country with a tight network of general hospitals and PCI centres and without any significant geographical barriers than can complicate logistics. Finally, we did not account for individuals residing close to the borders who may undergo PCI in Belgium or Germany.

Based on a computational model, the expansion of off-site PCI centres in the Netherlands has reduced the ambulance driving time to PCI centres in this country. It seems unlikely that additional expansion will further improve accessibility to PCI. Future efforts to improve PCI and ACS care should focus on strengthening the collaboration between general practitioners, ambulance services, and off-site and on-site PCI centres, and on further development of the Netherlands Heart Registry.

N.P.G. Hoedemaker, R.J. de Winter, G.J. Kommer, H. Giesbers, R. Adams, S.E. van den Bosch and P. Damman declare that they have no competing interests.
Open Access This article is licensed under a Creative Commons Attribution 4.0 International License, which permits use, sharing, adaptation, distribution and reproduction in any medium or format, as long as you give appropriate credit to the original author(s) and the source, provide a link to the Creative Commons licence, and indicate if changes were made. The images or other third party material in this article are included in the article’s Creative Commons licence, unless indicated otherwise in a credit line to the material. If material is not included in the article’s Creative Commons licence and your intended use is not permitted by statutory regulation or exceeds the permitted use, you will need to obtain permission directly from the copyright holder. To view a copy of this licence, visit http://​creativecommons.​org/​licenses/​by/​4.​0/​.
vorige artikel Pre-procedural image-guided versus non-image-guided ventricular tachycardia ablation—a review
volgende artikel Evaluation of sex differences in patients with ST-elevated myocardial infarction: an observational cohort study in Amsterdam and surrounding region
insite
INHOUD
share
DELEN 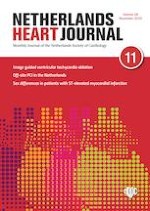 A rare mechanism of ectopy

Implantable cardioverter defibrillators at the end of life: future perspectives on clinical practice

A rare mechanism of ectopy