In peripheral spatial cueing paradigms, exogenous attentional capture is commonly observed after salient onset cues or with cues contingent on target characteristics. We proposed that exogenously captured attention disrupts the selectivity to target features. We tested this by experimentally emulating the everyday observation that in a viewing situation in which the observer is monitoring a stationary display fort change to occur, the onset of a salient stimulus (onset cue) or a change in a stationary stimulus similar to the expected one (contingent cue) has a distracting effect. As predicted, we found that both types of cues reduced the target detection sensitivity but enhanced the bias to respond in a go-nogo-paradigm. With the onset cue, the sensitivity loss was more pronounced at the side of the cue, whereas the contingent cue affected both sides likewise. Moreover, the effects of the onset cue interacted with the task difficulty: the more selectivity a task required the more immune it was against disruption, but the more likely was a response. We concluded that onset capture disrupts selective attention by adding noise to the processing of the target location. The effects of contingent capture could be explained with cue-target confounding. Finally, we suggest a new model of attentional capture in which exogenous and endogenous components interact in a dynamic way. 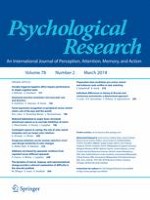 Individual differences in timing of discrete and continuous movements: a dimensional approach

Facial expression recognition in peripheral versus central vision: role of the eyes and the mouth