Two primary methods of quantifying executive functioning include self- or other-reports (i.e., questionnaire-based EF) and cognitive test performance (i.e., task-based EF). Despite their lack of concordance with one another and relatively inconsistent associations with attention-deficit/hyperactivity disorder (ADHD) symptoms, both approaches have been utilized in attempts to advance our understanding of the role of EF in symptoms of ADHD. The current study is the first to incorporate a direct assessment of behavior (i.e., actigraphy) to further clarify the relation between EF and hyperactivity using a multi-method approach in a sample of children with a range of ADHD symptoms. Fifty-two children between the ages of 8 and 12 completed a testing session during which performance on working memory and inhibition computerized tasks, as well as actigraphy data, were collected. Additionally, parent reports of hyperactivity/impulsivity, working memory, and inhibition were obtained. As expected, questionnaire-based measures of working memory and inhibition were strongly associated with parent-reported hyperactivity/impulsivity, whereas only the latter was associated significantly with mechanically assessed movement. In contrast, task-based working memory performance was more strongly associated with parent-reported hyperactivity/impulsivity relative to task-based inhibition. Further, both task-based working memory and task-based inhibition were similarly associated with mechanically-assessed movement. Finally, compared to questionnaire-based EF, both measures of task-based EF accounted for more variance in objectively-assessed movement. Collectively, these results highlight the measurement issues in the present literature, the importance of careful task and questionnaire design, and the value that alternative approaches (e.g., actigraphy) may provide with respect to advancing our understanding of EF.
vorige artikel Risk Taking by Adolescents with Attention-Deficit/Hyperactivity Disorder (ADHD): a Behavioral and Psychophysiological Investigation of Peer Influence
volgende artikel Empathic Accuracy in Female Adolescents with Conduct Disorder and Sex Differences in the Relationship Between Conduct Disorder and Empathy 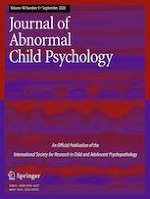 Psychological Distress amid Change: Role Disruption in Girls during the Adolescent Transition

Characterization and Prediction of Anxiety in Adolescents with Autism Spectrum Disorder: A Longitudinal Study

Callous-Unemotional Traits and Antisocial Behavior in South Korean Children: Links with Academic Motivation, School Engagement, and Teachers’ Use of Reward and Discipline