Empirical evidence indicates that late-onset depression (i.e., age of onset ≥60 years) is associated with executive function decline. This relationship suggests the possibility that executive dysfunction (ED) may contribute to depressive symptoms because it leads to decreased ability to inhibit ruminative thinking. This hypothesis was tested in a sample of 44 older adults reporting depressive symptoms with onset either late in adulthood or earlier in life. Consistent with hypotheses, older adults suffering from late onset, but not early onset, depressive symptoms showed an association between ED and depressive symptomatology. Furthermore, this selective relationship between ED and depressive symptomatology was mediated by ruminative tendencies. These results suggest that executive function deficits may contribute to late-onset of depressive symptoms by interfering with the ability to control ruminative thoughts.
vorige artikel Introduction to Special Issue on Rumination: From Mechanisms to Treatment
volgende artikel The Role of Rumination and Reduced Concreteness in the Maintenance of Posttraumatic Stress Disorder and Depression Following Trauma 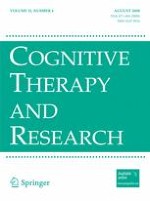