Executive function (EF) deficits are associated with depression. Given that few prospective studies have been conducted, it is unclear whether deficits contribute to depression or result from it. The present study examined whether self-reported EF prospectively predicted worsening of depression symptoms. Time 1 (T1) shifting, inhibition, and working memory (WM) were assessed in relation to T1 and time 2 (T2) depressive symptoms in participants pre-selected to range in risk for depression. Analyses indicated that poorer EF at T1 predicted increases in depressive symptoms and furthermore that this relationship was specific to WM. In contrast, a bidirectional relationship was not evident, as depressive symptoms did not prospectively predict changes in EF. Finally, T1 EF accounted for T2 depressive symptoms beyond two well established predictors of depression: depressive symptoms at T1 and rumination at T2. These findings suggest that EF deficits play an active role in depression onset, maintenance, and/or recurrence.
vorige artikel The Effects of Psychotherapy for Adult Depression on Social Support: A Meta-Analysis
volgende artikel Gender and Attention in Depression: Examining the Role of Modified Attention in Shifting Mood and Cognitions 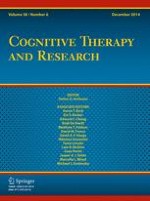 A Focused Attention Intervention for Preventing the Recovery of Initial Learning

The Effects of Psychotherapy for Adult Depression on Social Support: A Meta-Analysis

Perceived Control and Vulnerability to Anxiety Disorders: A Meta-analytic Review