A mental health evaluation project was conducted in the City of Rio de Janeiro for the entire population of young children who received services in public child daycare centers and preschools. The Brazilian Portuguese version of the Ages & Stages Questionnaires: Social-Emotional (ASQ:SE-BR) served as an outcome measure for social-emotional development. Four age intervals of the ASQ:SE-BR were investigated by time period, 2011 and 2012. A total of 76,806 children from 21 to 66 months were evaluated. Three thousand children were randomly selected from each age interval and year for the analyses. The analyses used unidimensional Rasch Partial Credit Model and multidimensional Rasch Partial Credit Model to evaluate the psychometric properties of the ASQ:SE-BR. The model comparisons indicated support for the one-construct model and the two-construct model, indicating adequate evidence for the internal structure for the ASQ:SE-BR. Only one item was found to have misfit. Sound psychometric properties were supported by the results including internal structure, weighted item fit, reliability, and invariance across years. Item difficulty presented an appropriate coverage across intervals. This study provides supportive evidence for the use and interpretation of ASQ:SE scores with urban low-income Brazilian population.
vorige artikel Assessing Coparenting Relationships in Daily Life: The Daily Coparenting Scale (D-Cop)
volgende artikel Prolonged Separation and Reunification among Chinese Immigrant Children and Families: An Exploratory Study 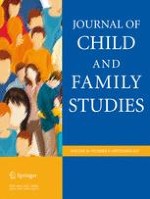 Prolonged Separation and Reunification among Chinese Immigrant Children and Families: An Exploratory Study

Does General Parenting Context Modify Adolescents' Appraisals and Coping with a Situation of Parental Regulation? The Case of Autonomy-Supportive Parenting

The Long-Term Impact of Family Routines and Parental Knowledge on Alcohol Use and Health Behaviors: Results from a 14 Year Follow-Up