Spanking is a divisive discipline practice in the USA and is considered an inappropriate and harmful discipline tactic by some scholars and practitioners. However, increased diversity in the USA has contributed to varying cultural beliefs regarding discipline, which in turn influences child development. While prior literature has examined correlates of spanking, few studies have examined its impact on Latinx children over time. We examined the use of spanking by Mexican-American (n = 185) and Dominican-American mothers (n = 141) across three time points. The main objective was to investigate whether maternal spanking predicted externalizing problems in young Latinx youth overtime. Families were recruited from public urban schools. Data were collected when children were 4-, 5- and 6-years old. A three-wave cross-lagged multi-group path analysis examined the potential reciprocal relationships between maternal spanking and child externalizing behaviors. According to cross-sectional linear regression models, spanking was concurrently associated with behavior problems at all three time points. However, the results of the cross-lagged multi-group path analyses showed that spanking did not predict subsequent behavior problems, nor did behavior problems predict subsequent spanking. The impact of spanking on child behavior may not be long-lasting in all Latinx families. Spanking and youth externalizing problems are concurrently and positively related; however, maternal use of spanking as a means of discipline did not result in negative and long term effects on child externalizing problems. Implications for practice with Latinx families are explored. 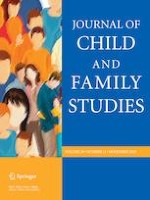 The Applicability of the “Revised Burden Measure” in Pediatric Settings: Measuring Parents’ Caregiving Burdens and Uplifts

Risk and Resilience among Children with Incarcerated Parents: Examining Heterogeneity in Delinquency and School Outcomes