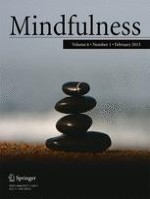 Clearing the Muddled Path of Traditional and Contemporary Mindfulness: a Response to Monteiro, Musten, and Compson

One-Session Mindfulness Meditation: A Randomized Controlled Study of Effects on Cognition and Mood

From Mindfulness to Right Mindfulness: the Intersection of Awareness and Ethics

Facing Up to the Question of Ethics in Mindfulness-Based Interventions