Externalizing and internalizing behavior problems are known to often co-occur, but mechanisms underlying this co-occurrence remain unclear: whether the associations are due to causal influences of one domain on the other or due to common risk processes influencing both domains. This study aimed to better understand the sources of co-occurring behavior problems by disentangling within- and between-child levels of associations between the two across the five years of childhood, from pre-kindergarten to Grade 3. We analyzed a longitudinal sample of 1060 children from non-urban settings in the U.S. using random-intercept cross-lagged panel models (RI-CLPMs) as an alternative to the commonly-used standard CLPMs. Results indicate that co-occurring externalizing and internalizing problems can be explained partly by a unidirectional influence from externalizing to internalizing problems operating within children and partly by stable differences between children that influence both domains of problems. Further analyses indicate that an executive function deficit in early childhood is an important shared risk factor for both problems, suggesting the utility of executive function interventions in preventing or addressing externalizing and internalizing problems in childhood.
volgende artikel Executive Function and Trajectories of Emotion Dysregulation in Children with Parent-Reported Behavior Problems 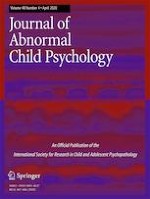 An Examination of Relations Among Working Memory, ADHD Symptoms, and Emotion Regulation

Decision-Making Deficits in Adolescent Boys with and without Attention-Deficit/Hyperactivity Disorder (ADHD): an Experimental Assessment of Associated Mechanisms

Differences in Parent and Child Report on the Screen for Child Anxiety-Related Emotional Disorders (SCARED): Implications for Investigations of Social Anxiety in Adolescents

Prosocial attention in children with and without autism spectrum disorder: Dissociation between anticipatory gaze and internal arousal