Although concerns about peer contagion are often cited in critiques of group treatments for troubled youths, few studies have examined the effects of exposure to deviant peers in residential group care settings. This study used administrative data of youth served at Boys Town, a nationally-known group care provider. Using latent class growth analysis, this study identified the externalizing behavior trajectories of youth in group care as well as the behavior trajectory of the peers with whom they lived, assessed the relationship between youth trajectory classes and individual and peer group characteristics as well as the relationship between an individual youth’s behavior pattern and the behavior pattern of proximal peers. Several results suggested the presence of peer contagion in group care: a trajectory class of gradually increasing externalizing behavior problems, the strength of deviant peer density in predicting an individual youth’s externalizing behavior trajectories and significant associations between behavior patterns of youth and proximal peers. While there is some evidence that suggests an increase in problem behavior during care, results from this study indicated that over 90% of the youth did not have an increase in problem behaviors and that positive peer influences may also be protective and inhibit problem behaviors.
vorige artikel Predictive Value of Informant Discrepancies in Reports of Parenting: Relations to Early Adolescents’ Adjustment
volgende artikel Are Oppositional-Defiant and Hyperactive–Inattentive Symptoms Developmental Precursors to Conduct Problems in Late Childhood?: Genetic and Environmental Links 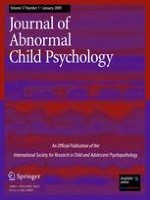 Interpretation of Ambiguous Information in Girls at Risk for Depression