Both attention-deficit/hyperactivity disorder (ADHD) and autism spectrum disorder (ASD) have been linked to increased reaction time variability (RTV), a marker of attentional fluctuation. Here we test whether specificity to either trait emerges when we examine (1) detailed ex-Gaussian and frequency RTV subcomponents, (2) effects while controlling for the other trait and (3) improvement in the RTV measures following rewards or a faster event rate. 1110 children aged 7–10 years from a population-based sample completed a Go/No-Go task under three conditions (slow, fast and incentives). We measured RTV with standard deviation of RT (SDRT), ex-Gaussian distribution measures (Sigma and Tau), RT fluctuations in cycles of ~14–90 s in all conditions (Slow-4 and Slow-5), and RT fluctuations in cycles of 2–14 s in the fast condition (Slow-2 and Slow-3). Parent-rated ADHD and ASD traits were obtained. All refined RTV components were linked to ADHD traits only and not to ASD traits, while Sigma did not relate to either trait. Although both ADHD and ASD social-communication traits were associated with SDRT, the association with social-communication impairments disappeared when controlling for ADHD traits. A reward-induced improvement in RTV measures, indicating malleability, emerged in relation to ADHD traits but not ASD traits. Under closer inspection, specificity emerges of high RTV to ADHD traits. For the clinician, our findings indicate that attentional fluctuation in children with high ASD traits may be due to co-occurring ADHD traits and emphasise how the effectiveness of rewards does not generalise from ADHD to ASD traits. 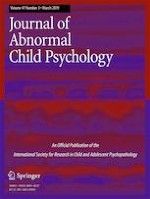