The Minnesota Living with Heart Failure Questionnaire (MLHFQ) is the most widely used health-related quality of life measure in both clinical and research settings. Nevertheless, its measurement model has never been confirmed. This study aims to fill that gap with a large international sample.

Data from eight studies (3,847 patients with heart failure) from 21 countries were merged and analysed. Common variables included MLHFQ scores, functional capacity, cardiovascular risk factors and the socio-demographic characteristics of the patient. The measurement model of the MLHFQ was assessed by means of exploratory and confirmatory factor analyses (EFA-CFA). The reliability of MLHFQ scores was evaluated using Cronbach’s alpha coefficient and the MLHFQ’s ability to differentiate among known groups was assessed through severity levels.

Findings from the EFA and CFA suggest that the MLHFQ total and domain-specific scores fall within a bifactor model. The physical and emotional scores were supported within the sample, as was the original total score. Furthermore, a third factor was revealed regarding social environment. The reliability coefficient reached 0.9 for almost all physical and total scores. All the MLHFQ mean scores showed the ability to differentiate among functional capacity groups, with most of the effect size coefficients reaching 0.8.

Beyond the suitable degree of reliability and validity displayed by the MLHFQ scores in the different country-specific versions, our results confirmed for the first time the unidimensionality of the most commonly used score in HF patients: the total MLHFQ score. Moreover, the social environment domain identified in this study can now be considered when assessing these patients’ HRQL, especially as a relevant outcome with regard to disease management. 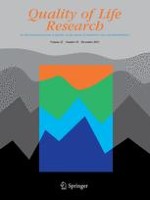 A mixed method exploration of survivorship among Chinese American and non-Hispanic White breast cancer survivors: the role of socioeconomic well-being

Self-rated health: analysis of distances and transitions between response options