This study investigated the psychometric properties of the Autism Mental Status Examination (AMSE) in a Brazilian sample of children and adolescents with autism spectrum disorder (ASD). A sample of 260 children and adolescents, comprising 56 (21.5%) females and 204 (78.5%) males, was assessed. The participants were submitted to both the childhood autism rating scale (CARS-BR) and the AMSE. The CARS-BR was used to estimate ASD severity and the cutoff point on the AMSE. Spearman’s correlation test was employed to determine the correlation between the AMSE and CARS-BR scales. The cutoff values were calculated using the ROC (receiver operating characteristic) curve, identifying the sensitivity, specificity, positive predictive value (PPV) and negative predictive value (NPV). The homogeneity of the items of the AMSE was determined using Cronbach´s alpha. The AMSE exhibited good internal consistency (0.74), sensitivity (0.91) and specificity (0.98); and high correlation with the CARS-BR (ρ = 0.91, p < 0.01). Preliminary results showed that the AMSE is a tool with good psychometric properties for ASD screening. 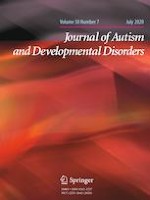 Correction to: State-Level Variation in Vocational Rehabilitation Service Use and Related Outcomes Among Transition-Age Youth on the Autism Spectrum

Brief Report: Analysis of the Relationship Between Turn Taking and Joint Attention for Toddlers with Autism