Evaluation of the ADOS Revised Algorithm: The Applicability in 558 Dutch Children and Adolescents | mijn-bsl Skip to main content
ZOEKEN MENU 1 2 3 4

The revised ADOS algorithms, proposed by Gotham et al. (J Autism Dev Disord 37:613–627, 2007), were investigated in an independent sample of 558 Dutch children (modules 1, 2 and 3). The revised algorithms lead to better balanced sensitivity and specificity for modules 2 and 3, without losing efficiency of the classification. Including the restricted repetitive behaviour domain in the algorithm contributes to a clinical ASD classification in modules 2 and 3. For module 1, the results indicate less improvement, probably due to the low-functioning population. In most groups, the advantages of the revised algorithms are achieved without losing the strength of the original algorithm.

The autism diagnostic observation schedule (ADOS; Lord et al. 1999) is a widely used and valuable instrument as a tool for diagnosing autism spectrum disorders (ASDs). The ADOS consists of four modules, each for a separate developmental or language level of functioning. Each module contains different tasks, and all of them are intended to provide the examiner with information on social, communicative, play and stereotyped behavior. Based on the ADOS algorithm a classification can be given of autistic disorder (AD), autism spectrum disorder (not being AD) or non-ASD.
Ongoing research showed that sensitivity and specificity of the original algorithm may be more related to cognitive and verbal level of functioning and chronological age, than seemed to be the case in the initial publications on the ADOS (Lord et al. 2000; Bishop and Frazier Norbury 2002; Joseph et al. 2002; de Bildt et al. 2004). Additionally, comparing the different modules based on the algorithm is complicated by the fact that the number and content of items are not totally comparable between the modules.
Recently, Gotham et al. (2007) published revised algorithms for modules 1 through 3 of the ADOS. The aims were to create more homogeneous algorithms over the various levels of development in order to make a first step towards a ‘calibrated metric of severity of autism, as independent as possible from current language levels’ and to improve the sensitivity and specificity of the ADOS classifications and their balance and thus to improve the diagnostic validity of the instrument. This more homogeneous algorithm was achieved by organizing the same number of items (i.e., 14 items) in the algorithms of each module, with similar content of the items per module. This increases comparability between the algorithms over the various modules and therefore between the various levels of development the respective modules are meant for. Additionally, the revised algorithm applies to smaller, more specific cells, in developmental level and age. The algorithms are therefore more specific for each subgroup, and this increases the sensitivity and specificity of the algorithm. Another change is the two domains included in the revised algorithm: a domain ‘social affect’ (SA) and one ‘restricted repetitive behaviors (RRB)’. The SA domain is included based on the fact that one factor was found to underlie the social and communication items in previous research with the ADOS (Robertson et al. 1999; Lord et al. 1999, 2000). It is a combination of 10 items from the former ‘social’ and ‘communication’ domains, yet per module without three items (two communication, one social) and one or two new (social) items. The RRB domain was added based on findings that such items may be important for diagnostic stability, as reported by Lord et al. (2006). This domain combines three items from the RRB section of the ADOS and one language item for each module. Gotham et al. (2007) give a clear and complete overview of the items in the new algorithm per module (p. 619).
In their study, the revised algorithm led to an improved specificity for non-autism ASD in lower functioning children, except for children under non-verbal mental ages under 15 months. The sensitivity for non-autism ASD remained relatively low in all groups. Adding the RRB domain did not contribute to distinguishing AD from pervasive developmental disorder-not otherwise specified (PDD-NOS), yet did contribute to the discrimination between PDD-NOS and non-spectrum cases. The authors strongly recommended replication of their revised algorithms in other populations.
Overton et al. (2008) explored the revised algorithm in 26 Hispanic children, administered with modules 1–3. In module 1 (n = 14), the accuracy of the revised algorithm was slightly increased. Classifications in module 2 (n = 3) and 3 (n = 8) remained unchanged after applying the revised algorithm. As mentioned by the authors, the sample is small and selective.
Gotham et al. (2008) replicated the revised algorithms in 1,282 children in the US. The results were comparable to the original study of Gotham et al. (2007). Comparability between the modules was increased. Additionally, predictive value of the ADOS for AD was increased, also increasing the validity of an autism diagnosis beyond the ADI-R. Besides, age and verbal IQ effects on the ADOS total scores were decreased.
Based on the research from Gotham et al. it can be concluded that the revised algorithms increase the comparability between the algorithms of the various modules in the various age or developmental groups. A certain score of a young child on module 2 has the same meaning as the same score for an older child on module 3. It also leads to a classification more independent from age and verbal IQ. Importantly, achieving this comparability and higher independence from developmental level has not been at the expense of the sensitivity and specificity.
In the current paper, the revised algorithms were applied to 558 children administered with modules 1, 2 or 3. The aim of the current paper was to investigate the revised algorithm in these children: how well does the revised algorithm add to a clinical classification of ASD or non-spectrum disorder?

ADOS administrations (modules 1–3) of 558 children were reevaluated with the revised algorithms of Gotham et al. (2007). All ADOS administrations had taken place as part of two large studies in the Netherlands concerning the genetics of ASDs. These studies included children referred for child-psychiatric problems/ASD and children from an epidemiological study of ASD in mental retardation (population based; De Bildt et al. 2005). This means that not all, and especially not all low-functioning participants from the current study were referred for problems in the autism spectrum, yet they were all evaluated by experienced clinicians. The majority of the children completed a diagnostic evaluation based on DSM-IV-TR criteria at the University of Utrecht ASD clinic, or at the University of Groningen Child and Adolescent Psychiatry Clinic/Autism Clinic (ATN). The others completed a standardized classification procedure in the epidemiological study (see for more detail De Bildt et al. 2004, 2005).
In order to enhance comparability with the studies of Gotham et al. the age was 12 years or younger for modules 1 and 2, and up to 16 years for module 3. Gotham et al. their sample into smaller and more homogeneous groups, analyzed separately. Following this division in the current sample, this resulted in n = 99 for module 1, Some Words; n = 124 for module 2, 5 and Older; and n = 335 for module 3. Because very few participants had no words at all at the time of ADOS-administration, a ‘no-words’ group as described by Gotham et al. could not be included in the current study. Additionally, children younger than 5 could not be included for module 2 due to the small number of administrations in this age range. Thus, the current study only addresses three of the five divisions of the new algorithm.
The age range for the total sample is 13–198 months. The sample contained 193 (34.6%) children with a clinical classification of AD, 221 (39.6%) with non-autism ASD, and 144 (25.8%) with a non-spectrum classification. Of these 144 the majority had MR (110, 76.4%; most of them from the epidemiological study), 10 ADHD (with or without ODD), 4 a language disorder, 2 selective mutism, 5 anxiety, 2 ODD, 1 motor coordination disorder, 6 were unclear, 3 had no psychiatric disorder, and 1 had another psychiatric disorder. In all modules the majority were boys: 77.8% in module 1, 79% in module 2 and 81.5% in module 3. In Table 1, characteristics of the participants are presented by module and diagnostic group. Of all participants only one administration was included in this study.
Table 1
Characteristics of the participants
M1 SW module 1 some words, M2 module 2, M3 module 3, Age age in months, IQ IQ based on various tests, ADI S ADI-R social total, ADI C–V ADI-R communication total for verbal children, ADI C-NV ADI-R communication total for non-verbal children, ADI RR ADI-R restricted, repetitive behaviors total, ADOS S ADOS social total, ADOS C ADOS communication total, ADOS SA ADOS social affect (revised algorithm), ADOS RR ADOS restricted, repetitive behaviors (revised algorithm)
In general, the current sample is older, contains more clinical non-autism ASD-classifications and lower functioning cases (especially non-spectrum) than the samples of Gotham et al. (2007, 2008). For all modules, IQ is significantly lower in the non-spectrum group than in the A(S)D groups. For module 1, Some words and module 3, children in the non-spectrum group are significantly older than in the A(S)D groups. 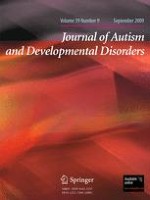 Attachment and Symbolic Play in Preschoolers with Autism Spectrum Disorders