Postoperative colorectal cancer patients with home Web/e-mail and phone were randomly assigned to one of the eight study groups: Groups 1–6 completed the survey via Web, IVRS, and paper, in one of the six possible orders; Groups 7–8 completed the survey twice, either by Web or by IVRS. The 20-item survey, including the MSKCC Bowel Function Instrument (BFI), the LASA Quality of Life (QOL) scale, and the Subjective Significance Questionnaire (SSQ) adapted to bowel function, was completed from home on consecutive days. Mode equivalence was assessed by comparison of mean scores across modes and intraclass correlation coefficients (ICCs) and was compared to the test–retest reliability of Web and IVRS.

Mode equivalence was demonstrated for the BFI total score, BFI subscales, LASA QOL, and adapted SSQ, supporting the use of multiple modes of PRO data capture in clinical trials.
vorige artikel Whose quality of life is it anyway? Discrepancies between youth and parent health-related quality of life ratings in type 1 and type 2 diabetes
volgende artikel Language bias and self-rated health status among the Latino population: evidence of the influence of translation in a wording experiment 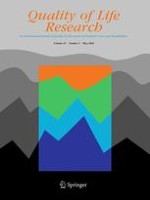 Measuring the impact of informal elderly caregiving: a systematic review of tools

Gender differences in the effect of social support on health-related quality of life: results of a population-based prospective cohort study in old age in Germany