This study aimed to investigate the role of leptin, ghrelin, neuropeptide Y, and nesfatin-1 in young children with autism spectrum disorder (ASD). A total of 44 children with ASD and 44 healthy controls aged 18–60 months were included. Plasma levels of hormones were measured using commercial enzyme-linked immunosorbent assay kits. Plasma leptin and ghrelin levels were significantly higher in the ASD group than in the control group. However, no significant difference for plasma neuropeptide Y and nesfatin-1 levels was detected between the groups. No relation was found between the severity of ASD symptoms, severity of eating problems, and plasma levels of hormones. Leptin and ghrelin may play a potential role in the pathogenesis of ASD.
vorige artikel Effects of Multiple Schedules of Reinforcement on Appropriate Communication and Challenging Behaviors: A Meta-analysis
volgende artikel Language Growth in Young Children with Autism: Interactions Between Language Production and Social Communication 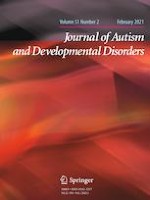 The Meaning of Diagnosis for Different Designations in Talking About Autism

Mind-Mindedness and Stress in Parents of Children with Developmental Disorders

Effects of Multiple Schedules of Reinforcement on Appropriate Communication and Challenging Behaviors: A Meta-analysis

Can a Person be ‘A Bit Autistic’? A Response to Francesca Happé and Uta Frith