Evaluating the Direction of Effects in the Relationship Between Religious Versus Non-Religious Activities, Academic Success, and Substance Use | mijn-bsl Skip to main content
ZOEKEN MENU 1 2 3 4

This longitudinal study tested the influence of involvement and selection hypotheses for the association between religious versus non-religious activity involvement and two salient indicators of adolescent psychosocial adjustment (substance use and academic achievement). Participants included 3,993 Canadian adolescents (49.4% girls) who were surveyed each year from grades 9–12. More frequent religious attendance (but not non-religious club involvement) in one grade predicted lower levels of substance use in the next grade. Higher levels of non-religious club involvement (but not religious service attendance) in one grade predicted higher academic achievement in the next grade, and higher academic achievement in one grade predicted more frequent non-religious club involvement in the next grade. The effects were robust, as they were invariant across grade and significant after controlling for individual, peer, and family characteristics. Most importantly, these results suggest that religious activities are not just another club, but, rather, that different developmental assets may be fostered in religious as compared to non-religious activities.
vorige artikel Sleep in Mexican-American Adolescents: Social Ecological and Well-Being Correlates
volgende artikel Associations of Parental and Peer Characteristics with Adolescents’ Social Dominance Orientation

Titel
Evaluating the Direction of Effects in the Relationship Between Religious Versus Non-Religious Activities, Academic Success, and Substance Use
Auteurs
Marie Good
Teena Willoughby 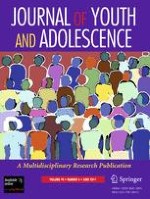