Background Methods based on item response theory (IRT) that can be used to examine differential item functioning (DIF) are illustrated. An IRT-based approach to the detection of DIF was applied to physical function and general distress item sets. DIF was examined with respect to gender, age and race. The method used for DIF detection was the item response theory log-likelihood ratio (IRTLR) approach. DIF magnitude was measured using the differences in the expected item scores, expressed as the unsigned probability differences, and calculated using the non-compensatory DIF index (NCDIF). Finally, impact was assessed using expected scale scores, expressed as group differences in the total test (measure) response functions. Methods The example for the illustration of the methods came from a study of 1,714 patients with cancer or HIV/AIDS. The measure contained 23 items measuring physical functioning ability and 15 items addressing general distress, scored in the positive direction. Results The substantive findings were of relatively small magnitude DIF. In total, six items showed relatively larger magnitude (expected item score differences greater than the cutoff) of DIF with respect to physical function across the three comparisons: “trouble with a long walk” (race), “vigorous activities” (race, age), “bending, kneeling stooping” (age), “lifting or carrying groceries” (race), “limited in hobbies, leisure” (age), “lack of energy” (race). None of the general distress items evidenced high magnitude DIF; although “worrying about dying” showed some DIF with respect to both age and race, after adjustment. Conclusions The fact that many physical function items showed DIF with respect to age, even after adjustment for multiple comparisons, indicates that the instrument may be performing differently for these groups. While the magnitude and impact of DIF at the item and scale level was minimal, caution should be exercised in the use of subsets of these items, as might occur with selection for clinical decisions or computerized adaptive testing. The issues of selection of anchor items, and of criteria for DIF detection, including the integration of significance and magnitude measures remain as issues requiring investigation. Further research is needed regarding the criteria and guidelines appropriate for DIF detection in the context of health-related items. 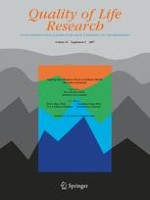 Patient-reported outcomes measurement and management with innovative methodologies and technologies