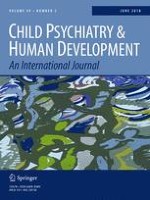 The Link Between Anxiety Severity and Irritability Among Anxious Youth: Evaluating the Mediating Role of Sleep Problems