To describe health status and health state utilities measured by the EQ-5D-3L in a population-based sample of individuals aged 85 + in Germany, and to analyze associations with basic socio-demographic variables. 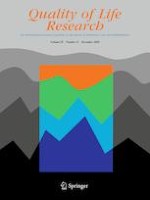 Quality of life in a real-world cohort of advanced breast cancer patients: a study of the SONABRE Registry

Patient-reported outcome measures (PROMs): can they be used to guide patient-centered care and optimize outcomes in total knee replacement?

The association between sociodemographic factors, frailty, and health-related quality of life in older inpatients: a cross-sectional study