Episodic future thinking (EFT), an intervention involving mental simulation of future events, has been shown to reduce both delay discounting and cigarette self-administration. In the present study, we extended these findings by showing that EFT in a web-based sample of smokers reduces delay discounting and intensity of demand for cigarettes (ad libitum consumption) in a hypothetical purchase task. No effect was observed on elasticity of demand (sensitivity to price) or cigarette craving. We also explored whether demand characteristics (specifically, the “good-subject” effect) might be responsible for observed effects. EFT participants were significantly better able than control participants to discern the experimental hypothesis. However, EFT participants were not better than controls at identifying whether they had been assigned to the experimental group and, likewise, showed no differences in attitudes about the experiment and experimenter. Importantly, effects of EFT on delay discounting and demand remained significant even when controlling for measures of demand characteristics, indicating that EFT’s effects are independent of participants’ perceptions about the experiment. 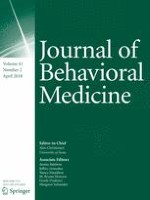 The effectiveness of strength-based, solution-focused brief therapy in medical settings: a systematic review and meta-analysis of randomized controlled trials