Suicide is the second leading cause of death for older adolescents and young adults. Although empirical literature has identified important risk factors of suicidal behavior, it is less understood if changes in risk factors correspond with changes in suicide risk. To address this knowledge gap, we assessed if there were different trajectories of suicidal behavior as youth transition into young adulthood and determined what time-varying risk factors predicted these trajectories. This study used four waves of data spanning approximately 13 years from the National Longitudinal Study of Adolescent Health. The sample included 9027 respondents who were 12–18 years old (M = 15.26; SD = 1.76) at Wave 1, 50% male, 17% Hispanic, and 58% White. The results indicated that 93.6% of the sample had a low likelihood for suicide attempts across time, 5.1% had an elevated likelihood of attempting suicide in adolescence but not young adulthood, and 1.3% had an elevated likelihood of attempting suicide during adolescence and adulthood. The likelihood of a suicide attempt corresponded with changes on depression, impulsivity, delinquency, alcohol problems, family and friend suicide history, and experience with partner violence. Determining how suicide risk changes as youth transition into young adulthood and what factors predict these changes can help prevent suicide. Interventions targeting these risk factors could lead to reductions in suicide attempts. 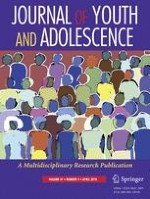 I and Us: A Longitudinal Study on the Interplay of Personal and Social Identity in Adolescence

A Cross-Cultural Perspective on the Relationships between Emotional Separation, Parental Trust, and Identity in Adolescents

How is Civic Engagement Related to Personal Identity and Social Identity in Late Adolescents and Emerging Adults? A Person-Oriented Approach

Trajectories of Identity Formation Modes and Their Personality Context in Adolescence