The population of adults with a congenital heart defect (CHD) is increasing, due to improved survival after cardiac surgery. To accommodate the specialised care for these patients, a profound interest in the epidemiology of CHD is required. The exact size of the current population of adults with CHD is unknown, but the best available evidence suggests that currently overall prevalence of CHD in the adult population is about 3000 per million. Regional differences in CHD prevalence have been described, due to both variations in incidence and in mortality. Knowledge of demographic variations of CHD may lead to new aetiological insights and may be useful for preventive therapies. Socioeconomic status, education, urbanisation, climatological factors, ethnicity and patient-related factors, such as comorbidity, lifestyle and healthcare-seeking behaviour, may play a role in CHD incidence and mortality. The higher risk of several major cardiac outcomes in males with CHD might well explain at least partly the increased mortality rate in men. Regional differences in quality of life among CHD patients have been reported and although methodological differences may play a role, sociocultural differences warrant further attention. Socioeconomic outcomes in CHD patients, such as lower education, more unemployment and less relationships, might have a different impact on quality of life in different cultures. To gain more insight into demographic differences around the world large international multicentre studies on the epidemiology of CHD are needed. 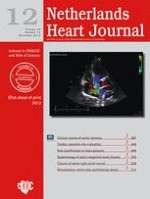 The NHJ 2012 in retrospect: which articles are cited most?

Clinical course of patients diagnosed with severe aortic stenosis in the Rotterdam area: insights from the AVARIJN study

Symptomatic severe aortic stenosis in the TAVI era: heart team assessment for all