Short-term low intensity parent implemented intervention studies for toddlers with autism spectrum disorder (ASD) have found it difficult to demonstrate significantly improved developmental scores or autism severity compared to community treatment. We conducted a randomized comparative intent-to-treat study of a parent implemented intervention to (1) test the effects of an enhanced version on parent and child learning, and (2) evaluate the sensitivity to change of proximal versus distal measures of child behavior. We randomized 45 children with ASD, 12–30 months of age, into one of two versions of parent-implemented Early Start Denver Model (P-ESDM), the basic model, in which we delivered 1.5 h of clinic-based parent coaching weekly, and an enhanced version that contained three additions: motivational interviewing, multimodal learning tools, and a weekly 1.5-h home visit. We delivered the intervention for 12 weeks and measured child and parent change frequently in multiple settings. We found a time-by-group interaction: parents in the enhanced group demonstrated significantly greater gains in interaction skills than did parents in the non-enhanced group. Both interventions were associated with significant developmental acceleration; however, child outcomes did not differ by group. We found a significant relationship between degree of change in parental interaction skill and rate of children’s improvement on our proximal measure. Parents in both groups reported satisfaction with the intervention. These findings suggest that parent skills improved more in the enhanced group than the comparison group. Children in the two groups showed similar improvements. Rate of individual parent learning was associated with greater individual child progress on a measure quite proximal to the treatment, though not on standardized assessments.
vorige artikel University Students with Autism: The Social and Academic Experiences of University in the UK
volgende artikel Gastrointestinal Symptoms and Oral Antibiotic Use in Children with Autism Spectrum Disorder: Retrospective Analysis of a Privately Insured U.S. Population 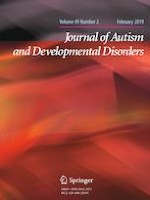 Daily Sources of Autonomy-Supportive and Controlling Parenting in Mothers of Children with ASD: The Role of Child Behavior and Mothers’ Psychological Needs

University Students with Autism: The Social and Academic Experiences of University in the UK