The etiology of the irritable bowel syndrome (IBS) is unexplained: biological, psychological and social factors must be considered. This study examined if differences in HPA-axis activity already exist in those who do not yet fulfill IBS criteria (i.e. “subthreshold IBS”). We also investigated whether there were differences between those who reported clinically relevant (i.e. distressing) IBS symptoms and those who did not. Thirty-six women were subdivided into three groups (IBS group, subthreshold IBS group, control group). Results showed differences in morning cortisol levels (U = 11.58; p < 0.05), with IBS patients showing a lower cortisol response compared to controls. Subthreshold IBS patients were comparable to controls regarding endocrine function. Diurnal cortisol levels did not differ between groups. Group comparisons between distressed subjects and non-distressed subjects regarding cortisol levels did not reach significance. The finding of endocrine abnormalities (at least in a sub-set of patients) is important since these might be associated with deficient pain processing in IBS.
vorige artikel The role of social support in weight loss maintenance: results from the MedWeight study
volgende artikel Identifying when choice helps: clarifying the relationships between choice making, self-construal, and pain 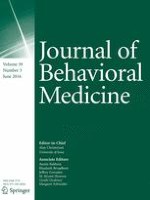 The role of social support in weight loss maintenance: results from the MedWeight study

Development of the Sensory Hypersensitivity Scale (SHS): a self-report tool for assessing sensitivity to sensory stimuli