Research on motor planning has revealed two seemingly contradictory phenomena. One is the end-state comfort effect, the tendency to grasp objects in physically awkward ways for the sake of comfortable or easy-to-control final postures (Rosenbaum et al., Attention and Performance XIII: Motor representation and control, Lawrence Erlbaum Associates, Hillsdale, New Jersey, 1990). The other is pre-crastination, the tendency to hasten the completion of tasks even at the expense of extra physical effort (Rosenbaum et al., Psychol Sci 25:1487–1496, 2014). End-state comfort seems to reflect emphasis on final states, whereas pre-crastination seems to reflect emphasis on initial states. How can both effects exist? We sought to resolve this seeming conflict by noting, first, that the effects have been tested in different contexts. End-state comfort has been tested with grasping, whereas pre-crastination has been tested with walking plus grasping. Second, both effects may reflect planning that aids aiming, as already demonstrated for end-state comfort but not yet tested for pre-crastination. We tested the two effects in a single walk-and-grasp task and found that demands on aiming influenced both effects, although precrastination was not fully influenced by changes in the demands of aiming. We conclude that end-state comfort and precrastination are both aiming-related, but that precrastination also reflects a desire to hasten early task completion. 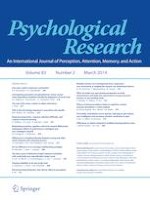 Personality assimilation across species: enfacing an ape reduces own intelligence and increases emotion attribution to apes

No sex difference in an everyday multitasking paradigm