The present study examines the role of irritability in form and function subtypes of aggression over 1 year in early childhood (N = 300, Mage = 44.70 months, SD = 4.38 months). This study prospectively tests hostile attribution biases (HAB) as a mediator in irritability’s relations with aggression, with hypothesized form-specific relations between HAB and aggression. Moderation by gender and a reversed alternative model (aggression to irritability, mediated by HAB), were also tested. Path analyses showed irritability predicted increases in all subtypes of aggression (βs = 0.24–0.34), but with moderation by gender, such that irritability significantly predicted increases in reactive relational aggression for girls only (β = 0.43). Reactive physical aggression also significantly predicted increases in irritability (β = 0.15). HAB was not associated significantly with any forms or functions of aggression, although gender differences emerged between HAB for instrumental provocations and reactive physical aggression. No significant indirect effects were found. Results highlight the importance of considering both forms and functions of aggression when investigating irritability, and point to potential gender differences in the role of irritability in relational aggression in early childhood.
vorige artikel Inhibitory Control Deficits in Children with Oppositional Defiant Disorder and Conduct Disorder Compared to Attention Deficit/Hyperactivity Disorder: A Systematic Review and Meta-analysis
volgende artikel The Use of Indirect Aggression among Boys and Girls with and without Conduct Problems: Trajectories from Childhood to Adolescence 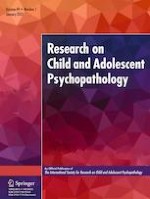 The Main and Interactive Associations between Demographic Factors and Psychopathology and Treatment Utilization in Youth: A Test of Intersectionality in the ABCD Study

Negative Life Events as Predictors of Anxiety Outcomes: An Examination of Event Type

Pathways of Internalizing and Posttraumatic Stress Symptoms Across Childhood and Adolescence