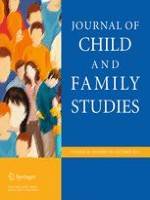 Development and Preliminary Validation of a Parenting Self-Regulation Scale: “Me as a Parent”

Female Adolescent Attitudes and Decision-Making Towards a Hypothetical Unplanned Pregnancy: An Exploratory Research