Youth are exposed to large amounts of violence in real life and media, which may lead to desensitization. Given evidence of curvilinear associations between exposure to violence and emotional distress, we examined linear and curvilinear associations of exposure to real-life and movie violence with PTSD symptoms, empathy, and physiological arousal, as well emotional and physiological reactivity to movie violence. College students (N = 209; mean age = 18.74) reported on their exposure to real-life and televised violence, PTSD symptoms, and empathy. Then, students were randomly assigned to view a series of violent or nonviolent high-action movie scenes, providing ratings of emotional distress after each clip. Blood pressure was measured at rest and during video viewing. Results showed that with increasing exposure to real-life violence, youth reported more PTSD symptoms and greater identification with fictional characters. Cognitive and emotional empathy increased from low to medium levels of exposure to violence, but declined at higher levels. For males, exposure to higher levels of real-life violence was associated with diminishing (vs. increasing) emotional distress when viewing violent videos. Exposure to televised violence was generally unrelated to emotional functioning. However, those with medium levels of exposure to TV/movie violence experienced lower elevations of blood pressure when viewing violent videos compared to those with low exposure, and those with higher levels of exposure evidenced rapid increase in blood pressure that quickly declined over time. The results point to diminished empathy and reduced emotional reactivity to violence as key aspects of desensitization to real-life violence, and more limited evidence of physiological desensitization to movie violence among those exposed to high levels of televised violence. 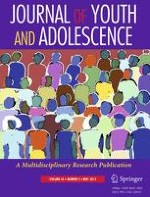 Can Brief Alcohol Interventions for Youth Also Address Concurrent Illicit Drug Use? Results from a Meta-analysis

Making (Up) the Grade? Estimating the Genetic and Environmental Influences of Discrepancies Between Self-reported Grades and Official GPA Scores

The Highs That Bind: School Context, Social Status and Marijuana Use

Kerry Robinson: Innocence, Knowledge, and the Construction of Childhood: The Contradictory Nature of Sexuality and Censorship in Children’s Contemporary Lives