To investigate whether emotional and physical reactions to perceived discrimination are associated with health-related quality of life (HRQOL) among whites and Latinos (by language preference) in Arizona.

Findings from this study suggest that physical and emotional reactions to perceived discrimination can manifest as diminished HRQOL. Consistent collection of population-based measures of perceived discrimination is warranted to track and monitor differential health vulnerability that affect Latinos.
vorige artikel Comparing life satisfaction and functioning 15 years after September 11, 2001 among survivors with and without injuries: a mixed-method study
volgende artikel The reliability and validity of the Chinese Short Warwick-Edinburgh Mental Well-being Scale in the general population of Hong Kong 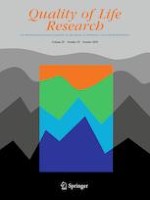