Psychological factors, such as cognitive-emotional processes, are proposed to play an important role in the etiology of premenstrual syndrome (PMS). Our aim was to determine whether there are differences in emotion regulation between women with PMS and non-PMS controls. The study included 54 women who suffered from PMS (confirmed by prospective daily ratings during two menstrual cycles), as well as 52 non-PMS controls. All participants completed the Cognitive Emotion Regulation Questionnaire (CERQ) as an explicit and the affect misattribution procedure (AMP) as an implicit measure of emotion regulation. Each participant conducted the self-report as well as the experimental assessments twice, once during the follicular phase and once during the luteal phase of the menstrual cycle. The AMP was conducted with neutral and negative picture and facial stimuli. Three different interstimulus intervals (100, 500, 1500 ms) were used to examine implicit emotion regulation processes. Women with PMS reported a significantly higher use of three dysfunctional emotion regulation strategies in the CERQ (p values < .001). In the AMP with picture stimuli, women with PMS showed stronger implicit negative affective reactions compared to non-PMS women, independent of menstrual cycle phase (p = .008). In the AMP with facial stimuli, this stronger negative affect misattribution appeared in women with PMS compared to the control group only in the luteal phase and only for medium interstimulus intervals of 500 ms (p = .050). The results suggest that PMS is associated with alterations in the processes of emotion regulation, as assessed both on an explicit and on an implicit level. Further research on the etiology of PMS should focus more on cognitive-emotional processing and its interaction with biological changes relating to the menstrual cycle.
vorige artikel Interactions Between Reappraisal and Emotional Nonacceptance in Psychopathology: Examining Disability and Depression Symptoms in Generalized Anxiety Disorder
volgende artikel Practicing Emotionally Biased Retrieval Affects Mood and Establishes Biased Recall a Week Later 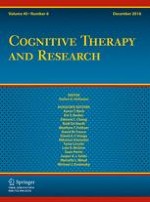 Anxiety Sensitivity and Alcohol Use Among Acute-Care Psychiatric Inpatients: The Mediating Role of Emotion Regulation Difficulties