This study compared emotion perception accuracy between children with Asperger’s syndrome (AS) and high-functioning autism (HFA). Thirty children were diagnosed with AS or HFA based on empirically supported diagnostic criteria and administered an emotion perception test consisting of facial expressions and tone of voice cues that varied in intensity. Participants with AS and the typically developing standardization sample of the emotion perception instrument had the same mean emotion perception accuracy, whereas participants with HFA performed significantly worse. Results also provided preliminary evidence for a difference in accuracy perceiving low-intensity tone of voice cues between participants with HFA and AS. Future research to build on these initial findings should include attention to tone of voice, underlying processing, and cue intensity.
vorige artikel Behaviour Management Problems as Predictors of Psychotropic Medication and Use of Psychiatric Services in Adults with Autism
volgende artikel The ‘Reading the Mind in the Voice’ Test-Revised: A Study of Complex Emotion Recognition in Adults with and Without Autism Spectrum Conditions 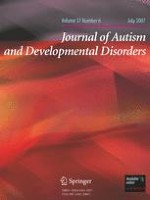