» Toegang tot de volledige tekst krijgen
Belangrijke opmerkingen
The present article is based in part on a Master’s Thesis study conducted by the first author under the guidance of the second author. 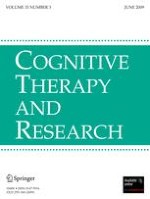 The Assessment of Emotion Regulation in Cognitive Context: The Emotion Amplification and Reduction Scales

An Examination of Optimism, Pessimism, and Performance Perfectionism as Predictors of Positive Psychological Functioning in Middle-Aged Adults: Does Holding High Standards of Performance Matter Beyond Generalized Outcome Expectancies?

Soothing Oneself and Resisting Self-Attacks: The Treatment of Two Intrapersonal Deficits in Depression Vulnerability

Metacognitive Therapy in Recurrent and Persistent Depression: A Multiple-Baseline Study of a New Treatment